Dawson James Campbell is 14 years old, and you’ll never meet a young man with better manners. He plays football, is #44 on the Celina Jr. High 8th Grade football team and has a little side hobby that has proven to be pretty lucrative.

Dawson has been involved with the Celina FFA and Collin County 4-H for years. Raising and showing 2 or 3 steer each year since he was 8 years old, he has a collection of jeweled belt buckles and awards won throughout the years that would make anyone proud.

His infectious smile seems to always be present, but it gets significantly bigger when you bring up Checkers, his nearest and dearest steer as of late. When asked about his favorite livestock friend, excitement takes over his face because he and Checkers worked together and did something that is well, a REALLY BIG deal.

Dawson, who credits his Dad for being his role model, hero and the person who taught him the trade, is the apple of both of his parent’s eyes. When asked about where he gets his flawless manners, he credits and claims that his mother definitely keeps him in line.

Dawson laughs under his breath as he explains the circumstances surrounding his big win. He and his entourage headed south to San Antonio without expectations of winning while his Dad, Heath, stayed behind just this once to work. His Dad brushed it off and said, “Just go and do your best,” and THAT he most certainly did.

When I asked how he told his Dad he had won, they both spoke of the exciting phone call. Neither were able to conceal their excitement or how sentimental the moment was. After the tenderness had passed, I laughed as Dawson added playfully and somewhat under his breath, “I basically told him to put THAT in his pipe and smoke it.”

The picture of Dawson, in the moment he won, says everything that needs to be said about the young man’s excitement and character. That moment won’t soon be forgotten and even though his Dad wasn’t there that one time, you can rest assured he was just as excited, celebrating the boy he loves back home as if he had been.

Heath and Carrie run Wild H Cattle Company in Celina. You need only drive up to their beautiful home to feel at one with nature and country living. The excitement these two share about their son’s win and what his future holds illuminates from their faces. They have taught Dawson the importance of hard work, integrity and determination. I was most impressed by how much they really care about the animals, their well-being and the life lessons that are taken away by illustrating the idea that what you get out of something is a direct reflection of what you put into it.

When asked about what he will spend his prize money on, Dawson smiles that smile and says, “A lot of it will go into savings, or maybe another steer or two.” His walls are covered with impressive awards and mementos from past winnings and this one is no different. He speaks of them all tenderly and with pride, each holding a certain memory and experience of hard work earned and there will be many more in the future.

Dawson and Checkers made an amazing team and although I could see the sentiments in his eyes for the creature he raised and cared for, this kid is very aware of the heart, soul and hard work that goes into caring for an animal.

Dawson devotes hours after school to his craft, as well as numerous hours in the barn in the summer months. It’s a lifestyle that promotes nurturing, healthy competition, knowledge of agriculture and citizenship. It teaches the importance of and sense of pride in community, as there are so many like-minded families that support each other in what has been proven to be much more than just a hobby. It is a way of life, and for Dawson Campbell, that’s definitely something to smile about. 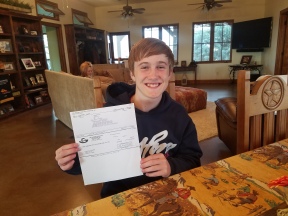 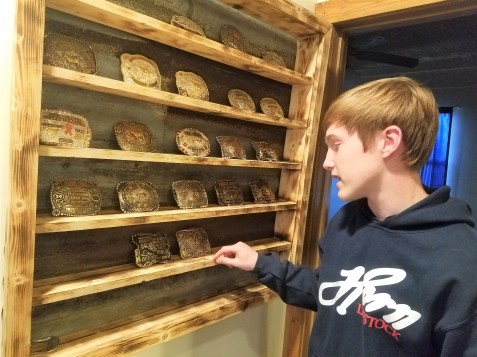 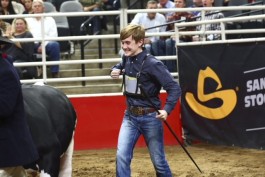